This is the third cargo van review in a series that focus on the 2015 MB Sprinter, Ram ProMaster, Ford Transit, Chevy Express and Nissan NV. It is part of the buying process of a new van, that will be converted into a nicely finished, one-person RV.

These reviews emphasis the elements of a van conversion, and are strictly my personal opinion and how that impacts on my conversion needs.

After my previous two dealer visits (Ram ProMaster and Ford Transit), I slowly start to understand which details of the van define the differences between the available brands/models and which features are most significant in this comparison. For the time being, I limit my review to the non-mechanical facts and focus primarily on the numbers, important for a van conversion. These dealer visits are also a great opportunity to get a good ‘feel’ for the size and layout of the vehicle.

Despite being one of the few Sprinter dealers in this area, not every model was available for inspection, but sufficient to get a good impression of this cargo van.

Outside
The visually appealing nose of the van, by design looks narrower and less overwhelming than the ProMaster and the inside door panels are well-chosen. The visibility through the driver and passenger windows is similar to the other models, with an akward, vertically mounted muntin partially interfering with the mirror view.
The rear doors and windows are again the best of the bunch, although I do like those of the Transit, but have a great dislike of the square and featureless rear doors of the ProMaster. Especially the door hardware is nicely integrated and painted to the color of the rest of the van.
Instead of the ‘gullies’ that stiffen the roof in the other models, the Sprinter has several narrow raised areas, that eliminate any standing water (and possible rust). 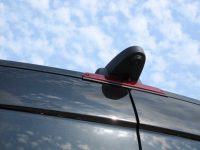 Compared to its competitors, Sprinter also has the largest selection of exterior colors and while pricey, the Metallic Graphite Grey would be my pick.
As in most cases, there are some things I don’t like, such as the big and ugly factory installed rear camera that is installed above the rear doors.

I feel that the Sprinter is by far the single favorite, when it comes to the finish and look of the vehicle, perhaps as a result of the German history of making high quality cars. 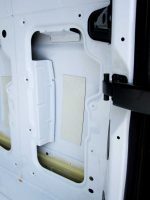 Access to the payload area by the driver is easy and the size of the wheel housings are kept to a minimum. To limit the driving noise, the van comes with sound vibration reducing ‘rubber’ patches installed throughout the interior of the van. The shorter version of this vehicle also has the option of a lower roof, which is undesired for a conversion van.
Standing height in the high roof van is more than adequate, yet the Sprinter walls tend to lean inwards, with an usable interior width, about 7” less than its competitors. This makes it feel a lot narrower and is in my opinion the biggest drawback for use of the van as an RV.

Summary
A very well built vehicle and designed with a good eye on the details and that is clearly reflected in the MSRP. By far the biggest downside are the tapered side walls, which, at a minimum, reduce the overall depth of each of the upper cabinets by at least 3-4 inches. In addition to my personal dislike of a diesel engine (more expensive maintenance/repairs and fewer repair shops in remote areas), this van will probably not be my final choice as the ultimate conversion vehicle. Selecting a vehicle is, of course, based on highly personal preferences, so your experience may differ.

Sign up to receive our newsletter.
We promise not to annoy you, but if you wish, you may unsubscribe at any time.
Go to mobile version